When you first meet Anika Evans, you’re instantly drawn in by her delicate smile, easy going nature and soft raspy voice.  However after speaking, to her for a few moments you’re made aware of what a true power house she really is.

As a graduate of Golden Gate Baptist Theological Seminary with a diploma in Christian Ministry, Anika has not only impacted, taught, and blessed the men and women of Calvary Hill but has been ministering through word, song and deed throughout the Bay Area and in Las Vegas, Nevada at numerous Youth/Young adult conferences, Mission fellowships and Women’s day events .

Anika has been privy to back up some well- known Gospel musical Giants such as Bishop Paul S. Morton in 2006, William Murphy, III 2007 at the Good News Today Prayer Conference, Charlin Moore from Israel Houghton’s group New Breed in 2012, and has since been blessed to complete her own Gospel CD Project entitled “It’s Necessary” which was released October 2012.

Every Song on Anika’s CD, has a life changing and transforming message that will inspire and encourage any person from any walk of life. Songs such as “We Owe It All to You Lord” featuring Jomaica Kellom , that reminds the believer that everything we have comes from God, and “Awesome Are You Lord” featuring Label Mate Greg Tre Harris reminds us of the Awesome and Mighty Power of God.  The life altering track “I Choose Joy”, reminding the believers that no matter what your circumstances are choose Joy (Jesus over Your circumstances) is an encouragement to say the least when one is faced with life’s challenges.  The title track which is a testimonial of how the Lord spoke to Anika in a rough period in life ensuring her that everything she was enduring was Necessary for her next level in life and that nothing she went through would be wasted but would only enhance her as the Mighty Woman of God that He called her to be is a definite encouragement for everyone to hold on and not give up even when it gets a little tough.

She was nominated and won 3 Indie Music Channel Awards April 2013 in Hollywood CA, as “Best Gospel Artist”, and “Best Gospel Song” for her track “Magnify The Lord”, and for “Best Gospel Duo” featuring Greg Tre Harris for “Awesome Are you Lord".

On November 7, 2019 she released a New Single entitled "God's Favor then on October 16, 2020 she released her 2nd Single "Safe In His Arms". A remake from Milton Brunson and The Thompson Community Singers but with a jazzy groove to it.

Managed and signed to Independent Record Label C’hellaNique Records, Anika’s ministry of singing and speaking has taken her throughout the United States proclaiming Gods Goodness. As one Anointed, Appointed and Assigned by God to bless and work with Women of all ages and Youth and Young Adults, Anika has a passion to spread the “Good News” of the Gospel.

Look for her, God is doing an Awesome Work in and through His servant Anika Evans………. 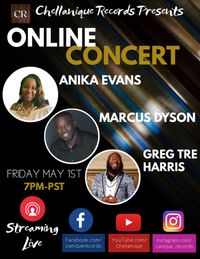 A Night Of Gospel Music LIVESTREAM 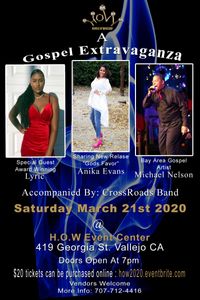